Are you a binary options 60 second hyper scalping trading machine or a wannabe?

Either blessed or lucky, You Have Landed at The Right Place! Our 60 Second Binary Options Scalper is Dead Simple to Trade and Win, Really a “No Brainer” Trading System!

Hey Fellow Traders, What’s up Ed, you say? I say, it might be the best thing since sliced bread!

You are absolutely going to love it and we are going  to “Make Trading Great Again”! (I wonder where I’ve heard something like that statement before? -ha, ha)

All kidding aside, I promise this new 60 second expiry system will be a refreshing experience for the pro trader, those with medium experience levels and even the complete newbie. It took a good part of 10 months to develop and perfect this trading system and I finally nailed it down with “Version 5”.

Does that sound like something that would excite you?

Well I sincerely believe that it can be done by just about anyone with this 60 second hyper trading system. Just a little practice using a demo binary options account or familiarizing yourself with the system, trading live with $5. trades to start. Either way, you very well could be making the big bucks in a very short period of time.

One can work anywhere in the world with only a laptop and an internet connection including on the beach or poolside. Is that total freedom or what? Enough small talk, let’s look at some pics of example trades. I think you will agree that a pic is worth more than a thousand words. Also much quicker and easier to understand what is going on. So without further ado, read on : 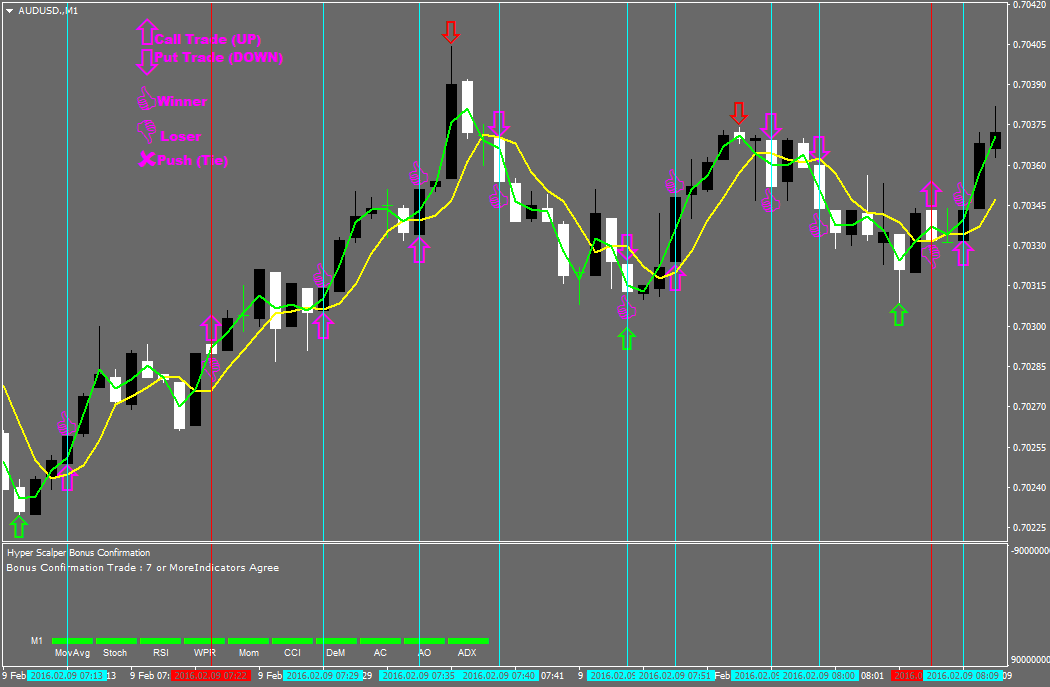 O.K. Synopsis time: 11 generated trades in 1 hours time. 9 Winners and 2 Losers for a win ratio of 82%. Making $100. trades we would have profited about $400. in an hours time. If that don’t get your adrenaline up, pinch yourself to see if you’re still alive. (heh.heh)

EURO/USD THE OLD FAVORITE OF MANY TRADERS 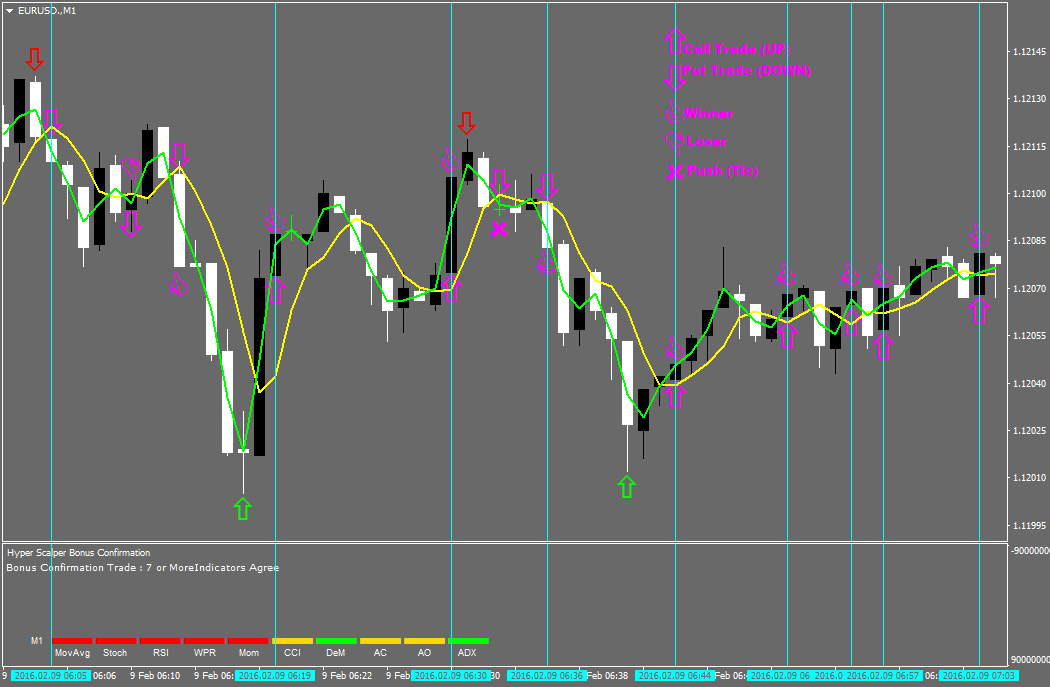 What can I say? About 2 hours into the Tokyo session. 9 trades in 1 hours time, all winners for a win ratio of 100% Profit about $600. bucks in an hour. If this doesn’t excite you, might as well stick to a day job. No kidding though, this is what’s happening!

O.K. ANOTHER CHART BEFORE I SHOW SOME ACTUAL RESULTS (KIWI/USD THIS TIME) 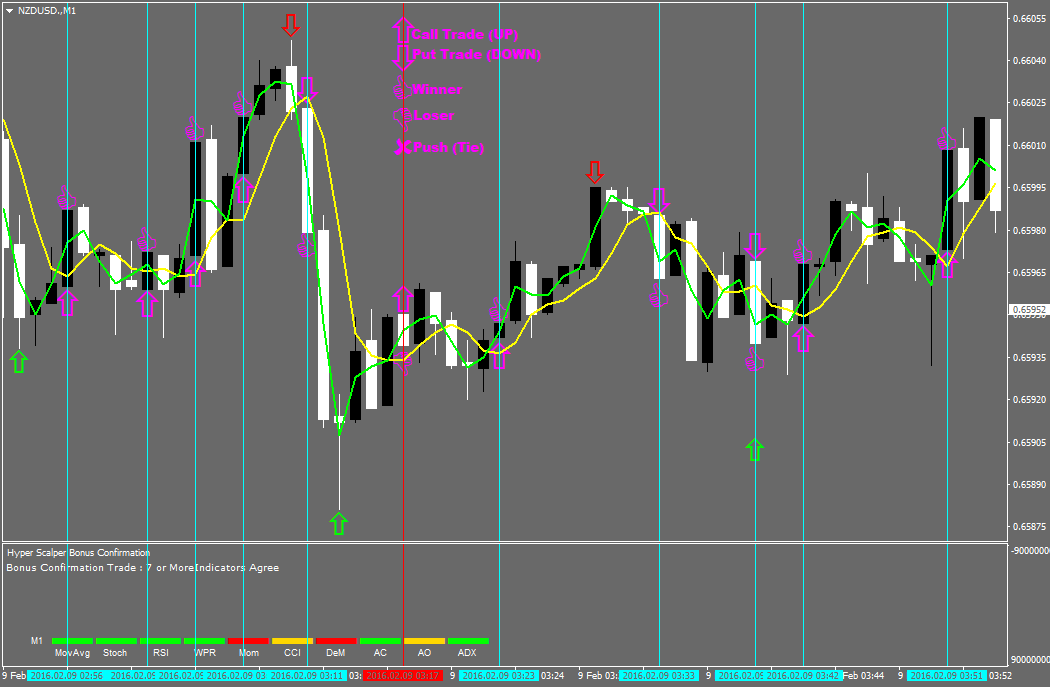 My friends, before I show you some real trade results, I would like to take this opportunity to explain something. The above charts represented some of the generated trades during a certain period, whether they were winners or losers.

The bottom window (Bonus Confirmation Trade Indicator) can generate some other trades if so desired. Let me explain…

If you are in a winning trade and near the end of the 60 seconds, say a call trade for example, and the bonus trade indicator has 7 green bars or more a few seconds before to a few seconds after the closing of the winning trade, you can jump in with another call trade aa quick as possible and it will usually have a 90% chance of being a winner. The opposite with 7 or more red bars applies to a put trade.

This only works, though, if the confirmation is going the same way as the trade you are already in. However, this is something you might want to wait until you have some experience with the system before putting the bonus trades into affect. This could account for 2 or more extra winning trades in any of the above chart examples.

Enough said. Below are some actual trade results.

TRADING THE USD/YEN FOR 1/2 HOUR

Well Guys and Gals, you should see the awesome potential of this system. It really is fast money in the fast lane!

One thing that I would like to mention before I show you more example charts and trading results, is this: the system does have an audible/text box and arrow alert before a generated trade is developed. But if you are going to trade 60 second expiry times with a system like this (and want to be successful), you have to concentrate completely on your trading. No surfing the web, watching T.V., gossiping on the phone, etc. After all, you really never need to trade any longer than an hour session at any time, usually less.

If you consider yourself a trader, I am sure you can donate an hour or less of your time to concentrating on your trades. If you’re not prepared to do that, with all due respect, you would probably be better leaving this site and going on to the next promise of some miracle or holy grail system that is touted all over the net.

But if you’re still reading, I would bet that you have what it takes to really make a fulltime income, supplementing your present income or just having a ball making extra money to spend on the better things in life. If that is the case, a few more examples & results and you should be ready to click on the big orange button and join the 10% of traders that are successful because they decided to exercise a little discipline.

Not to mention that you will probably have the most easiest and most accurate 60 second system to trade and unlimited email support from your’s truly which is priceless and for the most part, unheard of in this industry.

THE EURO/JAPANESE YEN – 2ND HOUR OF THE TOKYO SESSION 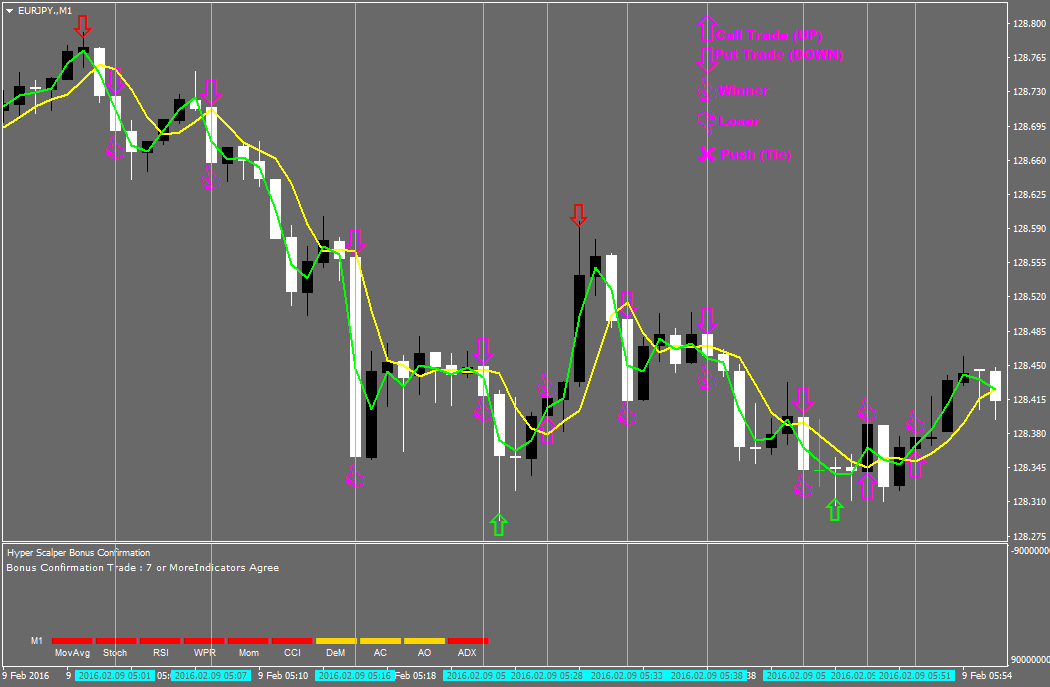 USD/CANADIAN, MIDDLE OF THE TOKYO SESSION 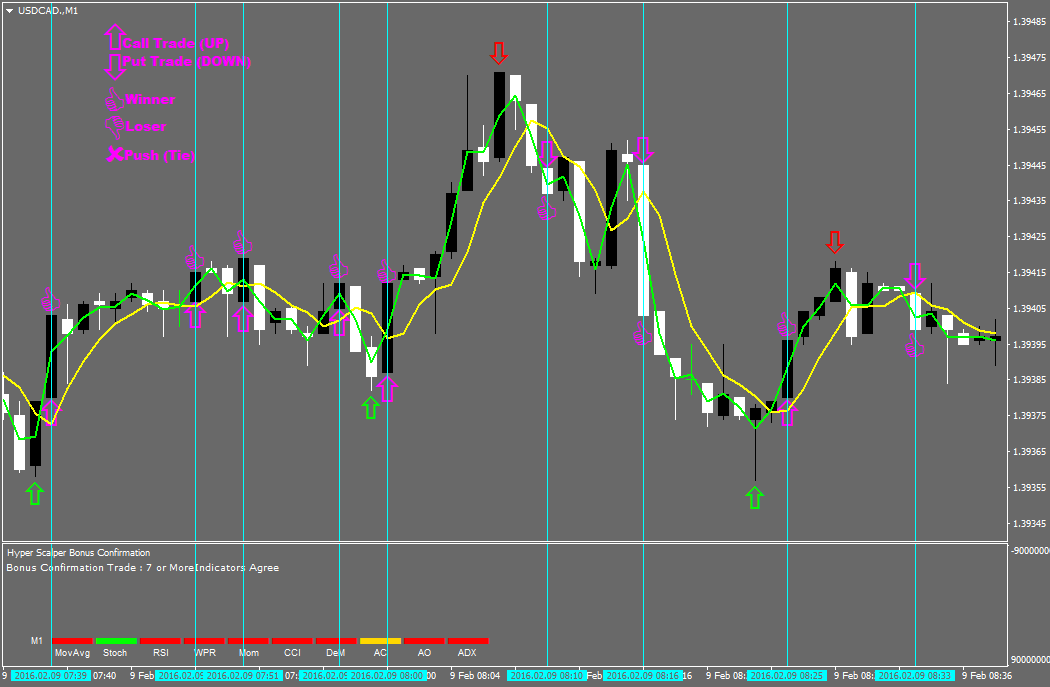 A COUPLE MORE TRADE RESULTS FOR YOU NAYSAYERS OUT THERE 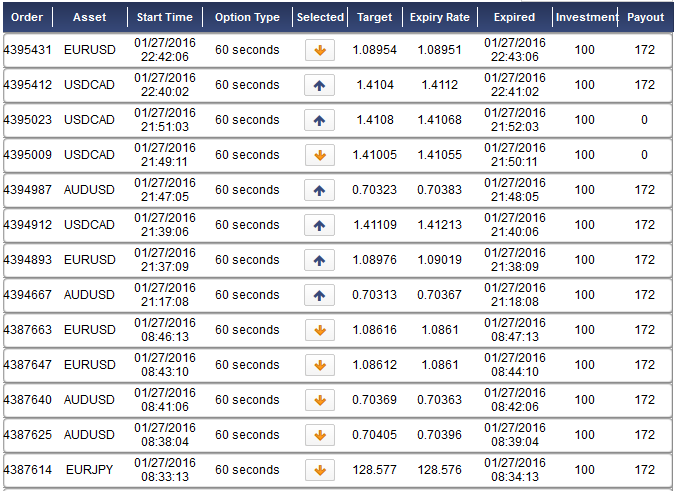 Here we have a total of 13 trades that I did in one day, 3 separate trading sessions.
Less than 1 hour total trading time in between house chores, shopping and watching some T.V.
But total concentration during trading, Just shy of  $600. in profits.

Did this for fun. Lately in these markets, gold and silver has been acting like currencies.
Two trades, 2 winners for a 100% win ratio and $288. bucks in 3 minutes.
How about that for a grand finale! (ha,ha)

Below are two vides of trades that I made for you. Number 1 is a regular 60 Second

Hyper Scalper trade and Number 2 is a regular trade with a bonus trade.

For a unique easy to trade  platform and an honest supportive Binary Options Broker, Here is the:

They have all types of trading to include rotating time, I’ve been with them 4 years

Last But Not Least, Easy and Prompt Withdrawals & Funding!

Did I Mention That He Offers a FREE No Deposit Demo Account Also?

Well, if you’re anything like me, you are probably chomping at the bit and I won’t take advantage of that.

Here is what we are going to do for you (but for a very limited time just for today).

We had planned to sell this awesome system for $139. one time cost but for fast action

That’s right only $49. and that includes my

solid and timely! Which is just about unheard of in this business.

All I can say is don’t think twice, just “JUMP ON IT!” 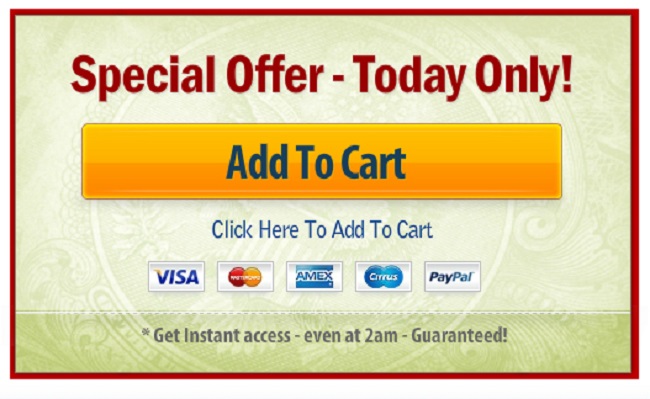 “Refund Policy:  There are no refunds due to this being a digital product.  If you cannot accept this policy,
do not purchase my product.  By purchasing my products you are accepting my refund policy.”