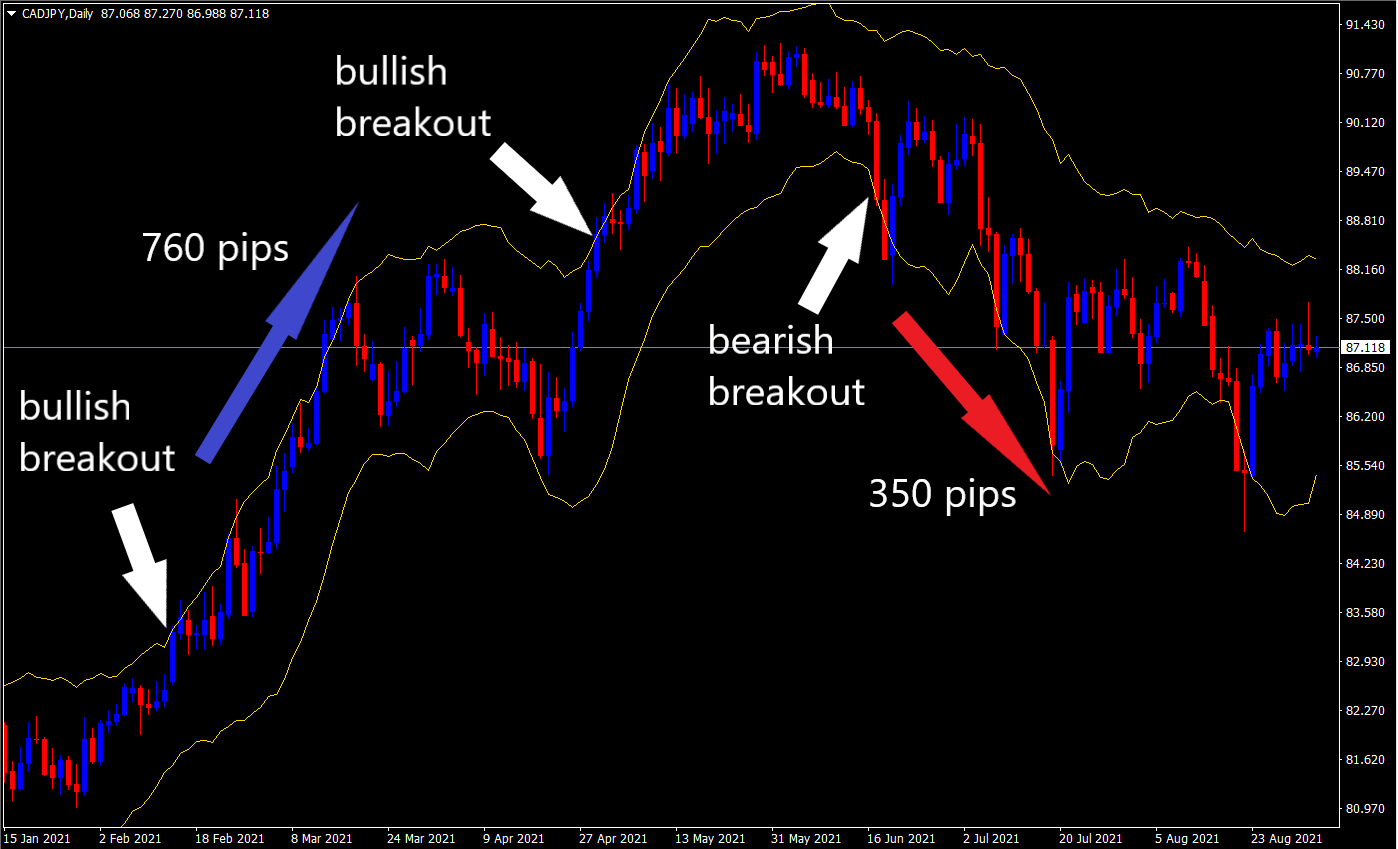 What Exactly Is This Indicator?

Versatile Keltner Channel is a brand-new indicator that gives more flexibility and accuracy to breakout trading.

It uses an algorithm based on different types of custom moving average (MA) and average true range (ATR) to plot a channel that trails along price movement.

The upper and lower bands of Versatile Keltner Channel are typically set two times the average true range (ATR) above and below a selected custom MA.

Based on the crossing between the channel and the price, you can identify breakout trade setups.

After a sideways period, if the price breaks above the upper band or below the lower band, and the channel angles the same direction of the price, that will be a signal for bullish/bearish breakout trade setup. And a new trend will be formed in that direction.

In my opinion, it is one of the best tools for breakout traders.

It has brought great results when I used it to trade breakouts.

Many times it helped me enter a trade even before a new trend was formed.

That could help you ride on a new trend from the beginning to the end. And extract extensive profits from that.

Now, let’s examine this exciting chart CADJPY Daily below to see how powerful this channel is: 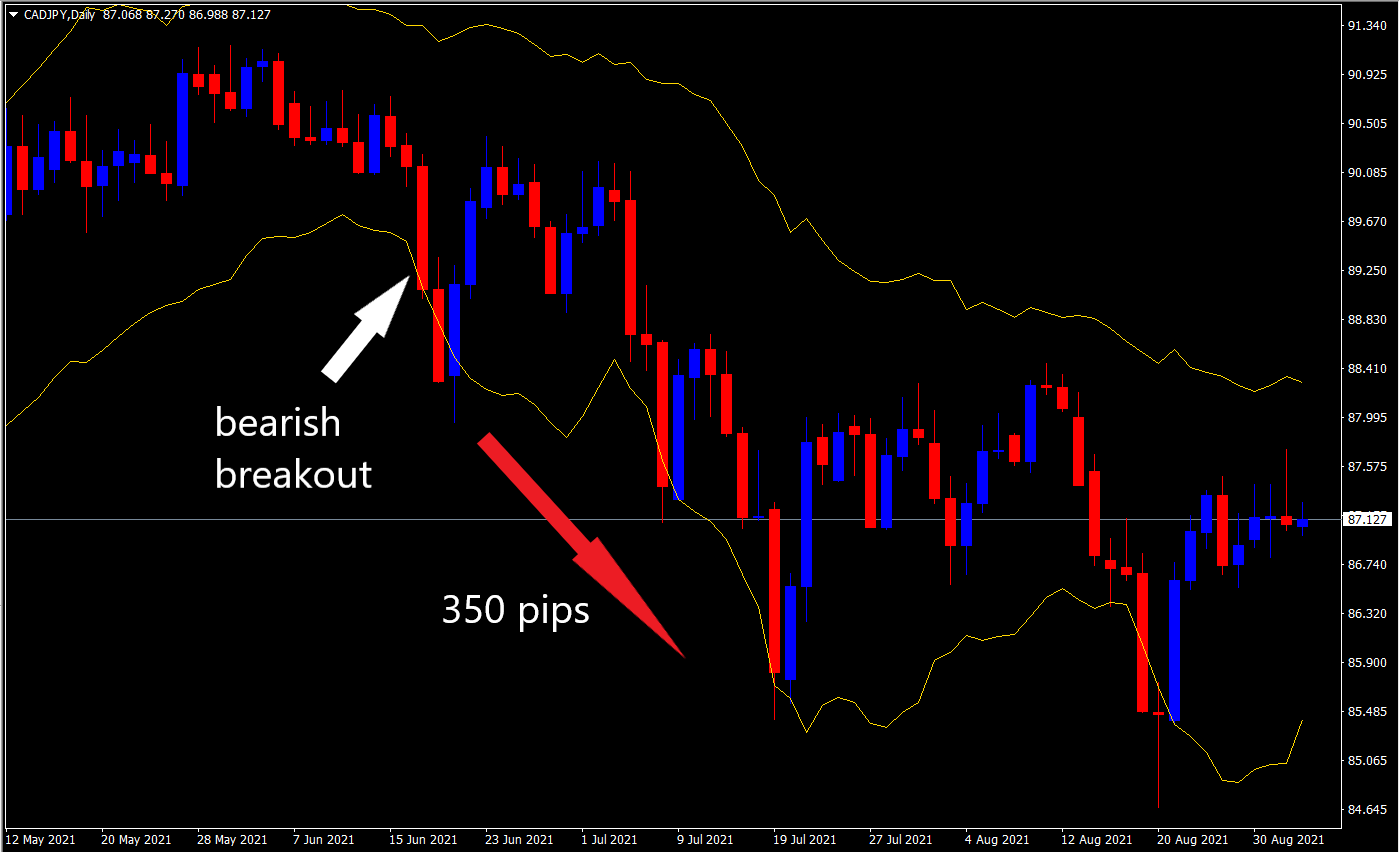 After a period of sideways movement, the price crossed below the lower band of Versatile Keltner Channel. That is a bearish breakout trade setup.

If you entered a trade at that position, you would have got 350 pips.

Its top-notch technology allows you to select among 11 custom MA types at your fingertips. That gives you the flexibility to examine different outcomes by 11 MA types, and choose your own favorite and profitable ones.

Other than that, you can adjust the MA period, and other parameters… in order to suite your trading style.

I will describe the powerful features of Versatile Keltner Channel in a later section.

Before I go on, let me tell you a story about Keltner Channel.

Keltner Channel has been very effective in determining trend direction.

When price reaches the upper Keltner band, price is predicted to be bullish.

When price reaches the lower Keltner band, price is predicted to be bearish.

The angle of the Keltner bands also helps in predicting trends.

The price may also oscillate within the Keltner channel, with the upper band as resistance level and lower band as support level.

Have a look at this chart EURUSD 5-minute below: 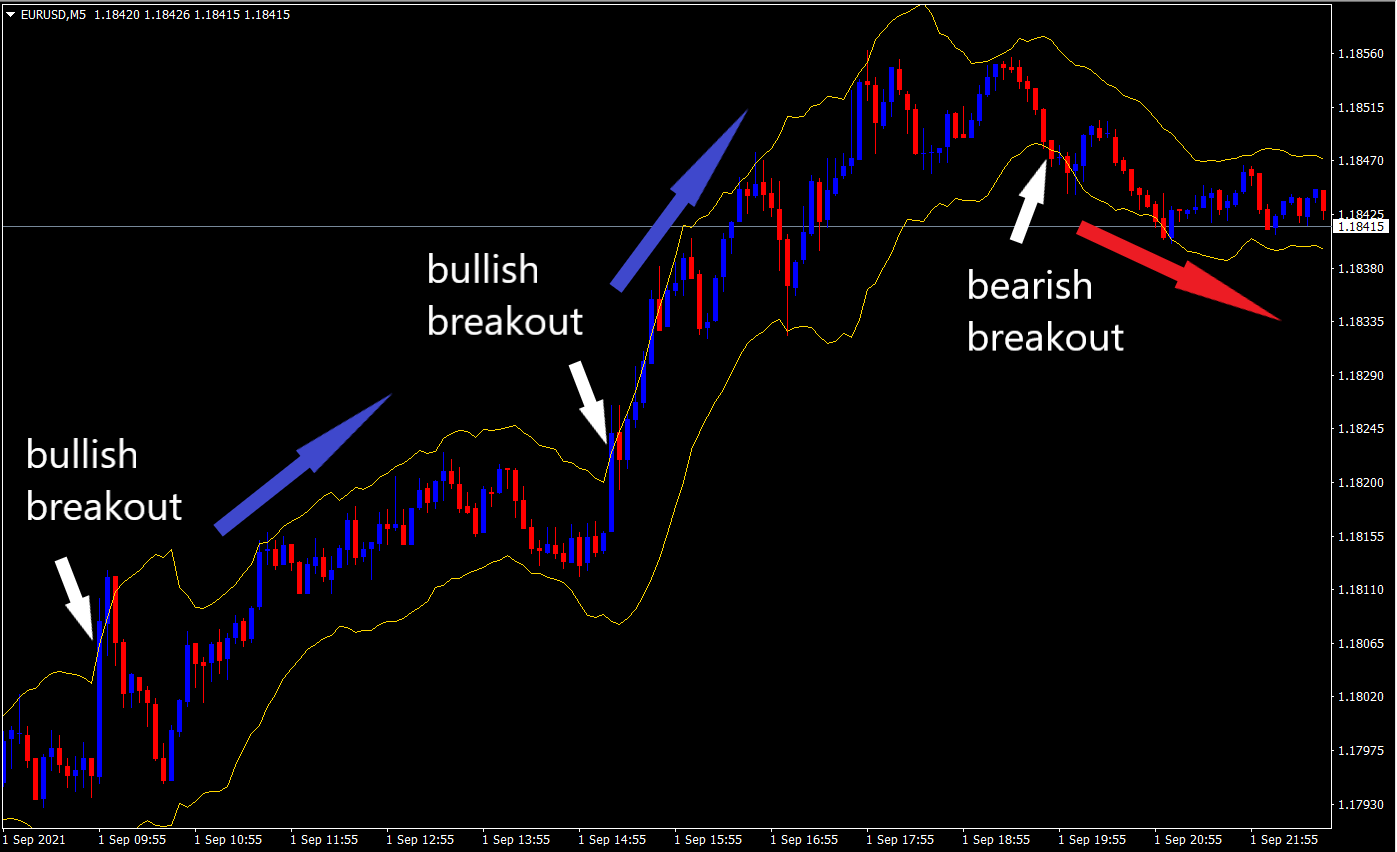 It identified 2 bullish breakouts and 1 bearish breakout before the new trends actually began.

Keltner Channel is considered as one of the best breakout trading tools.

That’s why millions of traders have used Keltner Channel in their breakout trading.

However, it does have drawbacks.

Keltner Channel uses EMA or MA as its backbone.

While EMA and MA are widely used, they are still LAGGING. And more often than not, traders need different types of MAs to identify breakout trade setups better and more accurately.

That’s why we set out to finetune and overhaul Keltner Channel to overcome those drawbacks: LAGGING and INFLEXIBILITY.

Our goals are: increased accuracy, increased versatility, and most importantly LESS LAG, i.e. early detection of any breakout.

After months of innovative efforts, I am happy to announce that WE HAVE TRANSFORMED KELTNER CHANNEL.

Versatile Keltner Channel indicator lets you define a CUSTOM moving average to use in its core engine.

You can choose from 11 different types of moving average:

You can follow these steps to select your favorite custom MA:

– Select Input, then select the MA Type you like

Have a look at this demonstration below to see how I change from Simple Moving Average (SMA) to Tillson MA (T3): 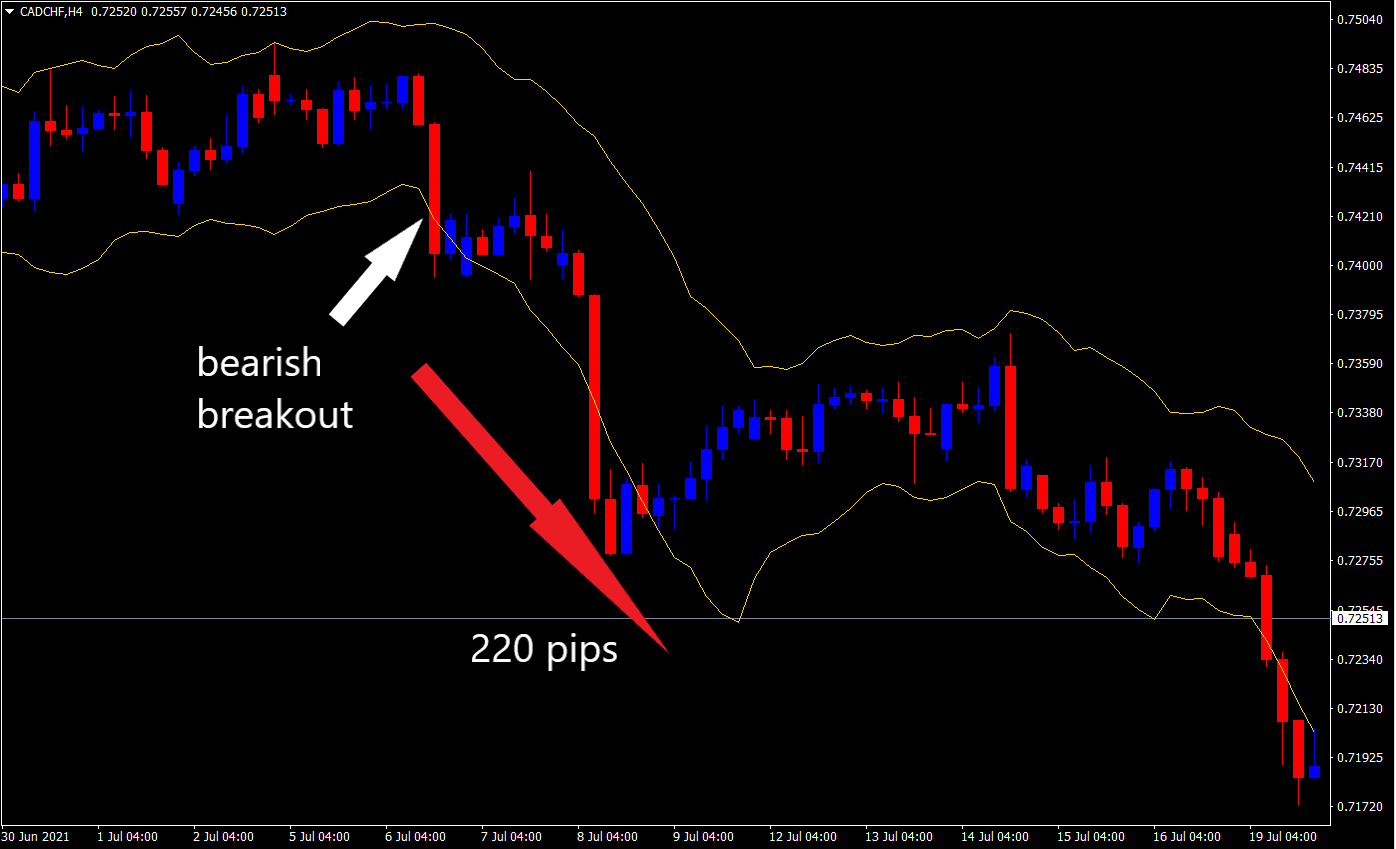 After a sideways period, the price crossed below the lower band. That was an alert of a bearish breakout, right at the beginning of a new downtrend.

If you entered a trade based on this breakout setup, you would have netted 220 pips.

You can see that Versatile Keltner Channel helps you get in the trade before the trend really starts.

If you entered a trade at the first bullish breakout setup, that would have materialized into a 760-pip winning trade.

Likewise, if you entered a trade at the bearish breakout setup, you would have won a 350-pip trade. 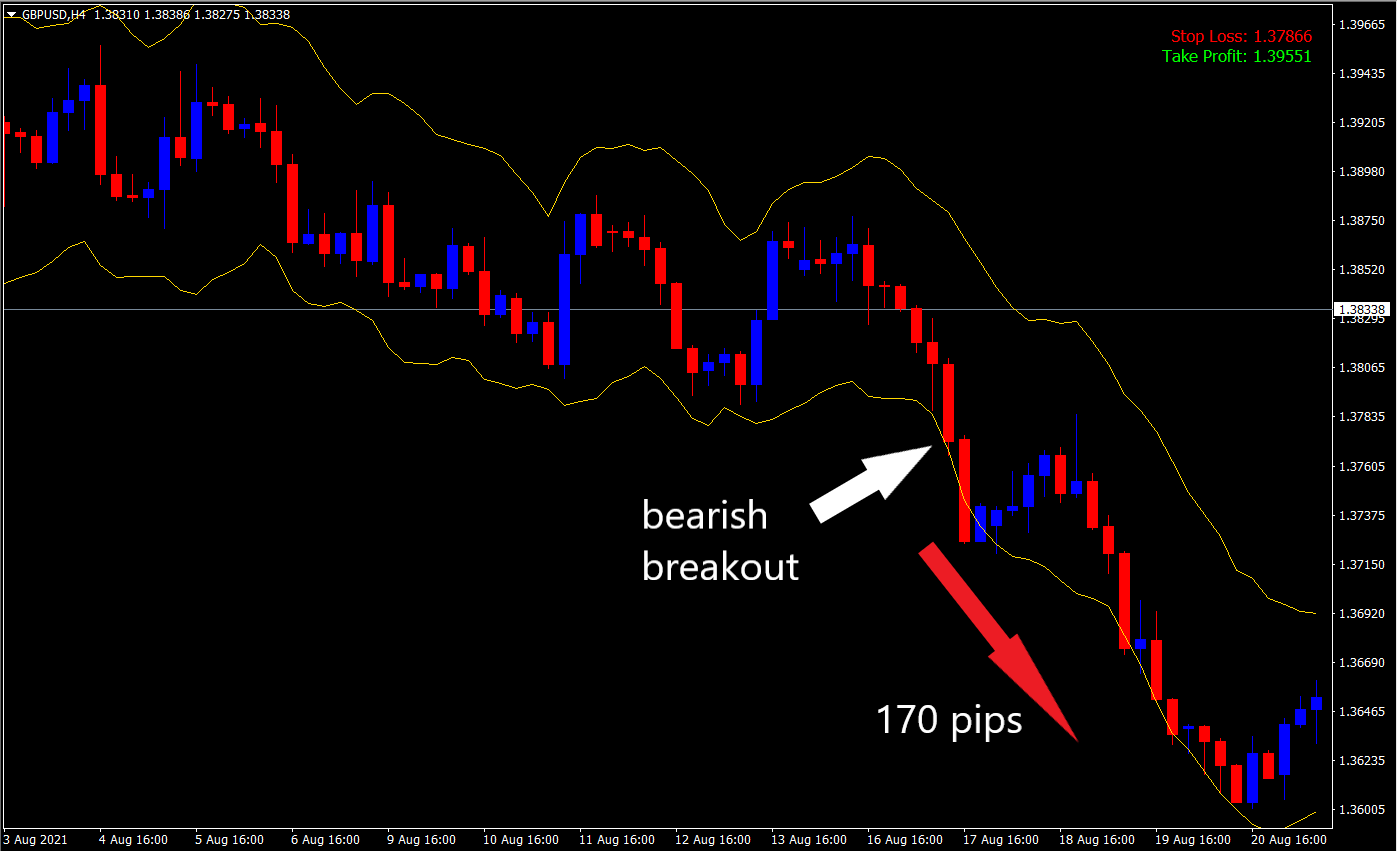 After a ranging period, the price crossed below the lower band and that was a bearish breakout setup.

If you entered a trade at that position, you would have scored a 170-pip winning trade.

Besides, one feature of Versatile Keltner Channel that I love is that you can adjust the period of each MA type:

It does all the heavy lifting for you, simply flashes alerts when price crosses the channel.

It gives you audio, visual, and pop-up alerts, push and email notification whenever price crosses the upper band or lower band…

Have a look at this picture to see it for yourself.

The indicator is extremely flexible: Works on ANY currency pair… ANY time-frame.